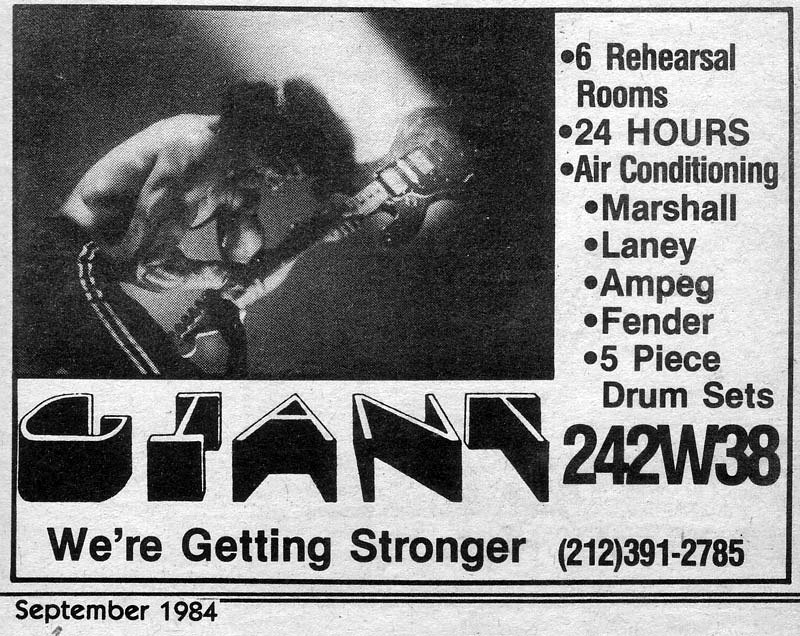 The 1st Giant was a place where a diverse group found a place where, even if they didn’t fit in, they were still accepted. I had the pleasure of meeting and working with such a diverse crowd. My earliest days there were with a band called the Interns of Dub. My downstairs neighbor in Brooklyn, Eddy, was a fixture, holding late night jam sessions that included all sorts of players (including some of the guys from Motorhead). I started working at Giant about 3 months later. Fred had actually just gotten back from some trip and Fred’s assistant had been watching the store. At that point there were some very nefarious characters populating the space (rumor had it that in Fred’s absence the kitchen area had been turned into a staging and weighing station for some very bad guys). Upon Fred’s return and my employment, Fred hired one of the greatest Giant characters ever: Mario Mendoza. The competitive weightlifter and erstwhile guitarist was a fixture at 38th street. He was hired as the cleaning crew, but Mario was much more than that. Part janitor, part bodyguard, part bouncer, Mario would make his presence known to everyone who entered the place. As he would clean, he would pick up everything in his path. “Is this yours?” he would ask as he tried to clean around the desk. Moving around the waiting area, “Is this yours?” as he moved guitars of band members waiting to get into rooms. I remember saying that he wasn’t being very accommodating to customers but I guess that was his prerogative. He responded to me “It’s not my prerogative, it’s my choice!” He could be the mellowest guy you ever met then in an instant you could say something completely innocuous and it would cause him to snap. Trust me a pissed off Mario was the last thing that ANYONE at Giant wanted to see. I must admit that he is one of the few people in my life I ever thought might actually KILL me. We had legendary disagreements that I’m sure know one could tell you what they were about. But he was Mario, and he was a major part of that era of Giant. Fred made sure that the mix at Giant was always… eclectic.

Mario competed in the Olympics (not sure what year) and won silver or bronze in the clean and jerk. He was friends with Arnold Shwartzenegger back in the days. He told me that he grew up in Belize (I think?). His mother worked for a diplomat and he was treated as part of the family. At least this is what he told me.

A great Mario story comes to mind. The landlord of the building was running the freight elevator..and somehow Mario got into some huge screaming argument with him. The landlord was so offended that he went to the basement and turned of all of the electricity to Giant. This was while several bands were rehearsing in the rooms. Mario continued to scream at the top of his lungs at the landlord next to the elevator shaft. I heard one of the rooms shouting help. The whole place was pitch black. I went to try and get them out of the room and the doorknob came off in my hand. So here was the studio with no light..and a mad man screaming his head off with the band not knowing what the hell was going on.

Of course we cant forget “Rent a Pick”. Being a resourceful man Mario had put a sign up that said “Rent a Pick.. 5 cents”. He would sell drumsticks and such…run out for food and drinks.

He truly was one of the great Giant characters.

He made an apperance years later…all scraggily. He said he was driving a van around the U.S. with a young woman accompanying him.

Just found these from my parents house.