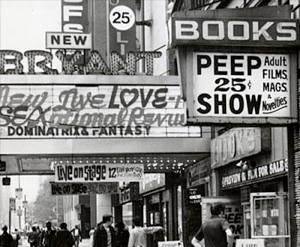 The city was an amazing place in 1979. Punk Rock and Hip Hop were starting to grow from their births in the few preceding years. New York was starting to have clubs pop up all over the place. Live music was flourishing. It was everywhere all over the city. All of the dance clubs incorporated live music. Clubs such as CBGB, Max’s Kansas City, Mudd Club, Hurrahs, The Latin Quarter, The Roxy to name a few were all exploding with energy and creativity. The sexual revolution was hitting its peak. Drugs were everywhere (and I mean everywhere!). Rents were dirt cheap and you needed very little to get by. New York had just pretty much hit rock bottom as far as the economy. There was a sense of danger and wildness all around the city, especially at night. Big brother was not breathing down your neck as he does now. People sold weed in the streets and parks. They would smoke in the movie theaters and openly in some places. Prostitutes were all over certain areas. The need for places to practice, music rehearsal studios, was on the rise as more and more bands were being formed. The city was alive with many different kinds of music as it always had been. But with the aesthetic of punk rock you didn’t need to know how to play to have a band. You just had to show up and start playing. And show up they did.

The area where Giant first started was on 38th St. between 7th and 8th Ave. just below Times Square, which had reached the apex of pornography and drugs. In the day it was a mix of business, the fashion district and import-export. As the night would progress the vice from 8th Ave. and Times Square would filter into the surround blocks. On every corner was some hustle, some shady character. You always had to watch your back and be aware of what was going on. Times Square action was round the clock as was all the comings and goings of the blocks that surrounded it. 8th Ave. was more like Times Square. It had a lot of porn shops mixed with clothing and electronics stores. 7th Ave. had more big business buildings that pretty much closed down at night. This period of time was fuel for the fire for Giant Studios.