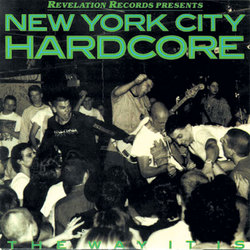 Just about all of the NYC hardcore scene went through Giant, both on 38th and 14th St. Bands such as Cro-Mags, Agnostic Front, War Zone, Underdog, Sick of it All, Nausea, PMS, Scab, Reagan Youth, Youth of Today, Gorilla Biscuits, Sheer Terror to name few.

These bands were highly influential on a lot of the derivative rock that came after it.

The funny thing is that most of them were cool friendly people.

The scene flourished through hardcore matinees at CBGB. A lot of violence at those events that eventually led to the end of the matinees.

The drummer from AF was the coolest guy, he had a tattoo of a burning building with people jumping out of it all the way down his arm. He was one of the nicest guys! He’d come in early to set up the drums, when Fred had the 3 dollar an hour drum rooms he’d come in to play for an hour and I’d let him play for 3 hours or until the next band came in.

His tats were when tats were still very dangerous, but he was just the nicest guy. He’d bring me coffee’s in the morning.