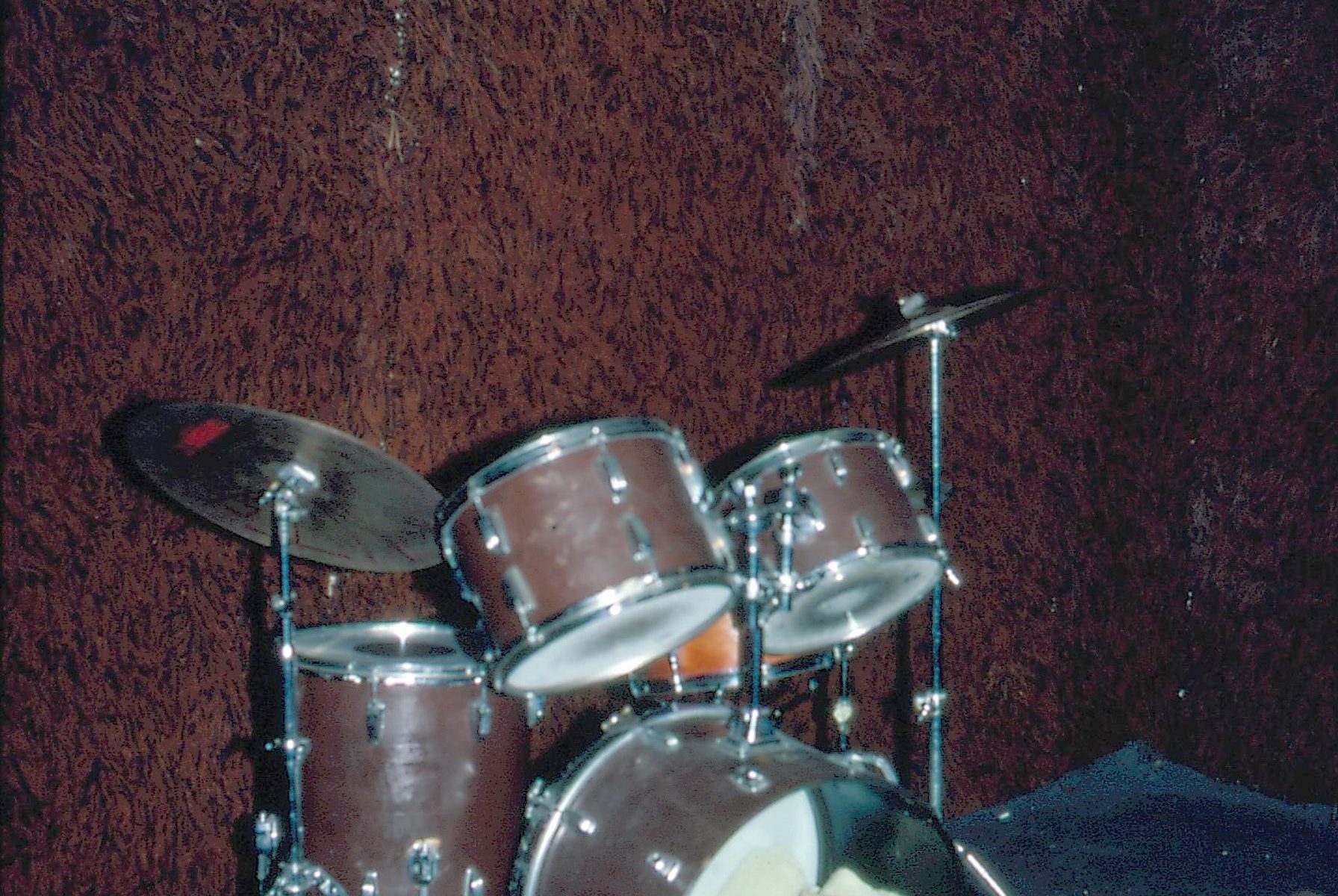 I remember I was working the first Saturday morning (ie., noon) shift at the new space at 14th Street. Everybody had pitched in and framed out the first coridoor’s worth of rooms over a couple of days as I recall (Correct me if I got that wrong Paul, Fred, Mike, or Jay) — I learned about the wonders of sheet rock for the first time, working alongside Bosco, Jay, and my old roommate Ted Proferes who always needed work. And I vaguely remember staple-gunning that wacked out Marcus Garvey print fabric all over one room, with a beer in one hand.

Anyway, I got the new keys and I come in Saturday for the first daytime full-on new Giant shift — I think Fred met me for this one. I got my donut and coffee from the joint on the northwest side of 14th street with the big fat Greek girl who was really nice, and take the elevator up and open the doors. And within a few minutes of being open, this guy comes in: 50-something, an old-school NYC popeye with big black-rimmed glasses, dented, ill-fitting black fedora over gray hair, needs a shave, a cheap-ass long black raincoat. He was short and he looked exhausted and stressed out. He was one of our new neighbors from the 13th Street side, and he wasn’t exactly rolling out the red carpet.

“Jeeziz Christ, the DRUMS, the DRUMS, it sounds like the goddamned jungle up here, what are you, boiling people in oil like in freakin’ Africa… Oy vey, the DRUUMMMSS!”

He had tossed and turned through our first full-on Friday night with the jungle drums of scum rock and ska and punk and all that good Giant stew rattling his rent-controlled apartment. He was old-school SRO NYC all the way!

He sat on the couch and complained to me and Fred (I think) like that for about half an hour, occasionally throwing in: “What is it you people are DOING up here?” Um, we’re a music studio. We just moved in. We can’t afford to wait for construction to be completed, but I assure you, more insulation and soundproofing is on its way! I remember Fred had prepped us for complaints, though I don’t remember exactly what stonewalling tactic we were suppposed to use. Plus I was terrible at that kind of thing, way too sympathetic for the plight of this beleagured old sod, and at the same time trying to keep from laughing.

Anyway, that was one of the first of the encounters with our new neighbors — and as I remember it, Fred ran great interference for a long time to come, keeping the Giant wheels turning and the engine greeezy.

Hi Pete
I forgot that you were there that day. I’ve forgotten a lot. Now you spur my memory. I remember that poor guy. His bedroom window was 50 feet from Studio C. He kept saying to me over and over, “Boom, boom,, boom, boom, every night, I feel like I’m being boiled in oil! Who ahh these people.” Eric imitated him best. I had to keep disappearing into the back office. I too couldn’t contain my laughter. Later I realized he was the beginning of the noise complaints which ended in a law suit from the retired lawyers judges and doctors who lived behind us on 13th St. That was 1986-7. Can you imagine trying to do that today?

Yeah –Eric had that guy down perfectly

“Boom -BoomBoom What the hells wrong with you people” –I almost forgot about that guy –He seemed to just kind of go away– I hope he wasn’t driven to suicide.

It probly didn’t help that at 5 am the morning after the move Pete and the gone fishn drumer(wish I could remember his name) & I jammed in studio B pre. AC with the window wide open.

Welcome to the neiborhood!!!

Oh man, Fred, I’m glad you confirmed that for me… I didn’t realize how close that poor guy’s window was… And yeah, imagine doing any of what you did as a wildman entrepreneur NOW in post-Rudy, post-Bloomberg NYC. Different town, no question. On the other hand, that poor guy wouldn’t be able to hold on to any decent real estate now either.

Jay, you have a sick memory, I had totally forgotten that you me and Doug jammed but now that you mention it I do recall that… wow… Wish I could hear what the hell THAT sounded like. Or maybe not.

It’s Amassing that I have I have any memory at al…..l considering my close affiliation with the beer machine. That’s a whole new topic — imagine that in ’06