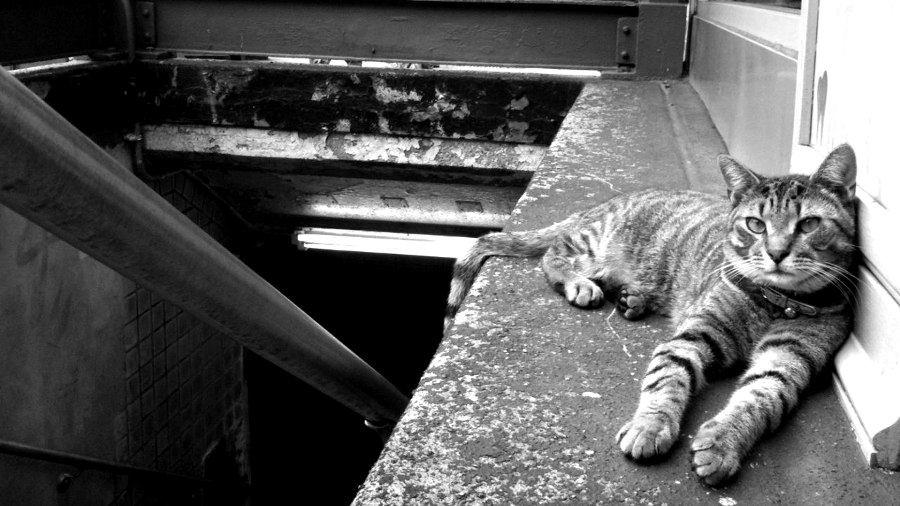 Bitch the cat was the Giant cat for many years. We rescued her from living in the basement of the building 123 W.14th st. She was terrified at first of all the people and band noise but gradually acclimated to her surroundings and roamed the rooms and hung out with bands all over the large top floor space.

The photo is not her but kind of looks like her and has her swagger and street smarts.

People would always ask..”awwww..whats the cats name?”. And you would have to reply, truthfully…”Bitch!” One time Bitch got her tail caught in the big metal door to Jays apartment/studio and it ripped off an inch or 2 of skin off of her tail so that just the bone was exposed. People would go “awwww..hey kitty…aww..err..akkkkk!!!” and pull their hand back quickly in horror. Jay and I finally decided that it was best to cut it off. I held her and Jay bravely snipped off the exposed bone. She didn’t even flinch.

I’ll never forget out near the desk, Adam Youch goes to to pet her(him) less than a week after the incident- runs his hands from Bitch’s head to tail like anyone would pet a cat — his hand shot up real fast when he got the last part of the tail– I’ll never forget the look on his face. a portion of the cat’s tail was sheered off in a door but there was this dried out bone that remained. Bitch (or Ed or Alice that we attempted to call her) was still a stray at that point She lived in the basement for some time under “Henry rule” When she first came up she hid in a pile of construction shit on the east side of the loft for about a month & a half The first time that I saw her acting social was seeing her hanging directly outside of studio N while “The False Prophets” were playing with their door wide open. After that she finally came out front. She (he) became a great pet & friend to us all She died at my studio on 27th st. We all did what we could but Alex & co footed a big vets bill from an abscessed tooth -the meds closed in. From my research — that cat lived more than 20 years. Not bad & not really that much younger than ANY of us at the time

Yeah. I had to put up more than a cat should. someone talk to me, or just feed me from my dinosaur bowl…ahhh screw yous all, I’m going back out on the ledge.